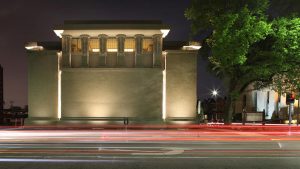 Frank Lloyd Wright was never one to fret about meeting deadlines, sticking to budgets or roofs that leaked. So there is something fitting about the delayed, but altogether triumphant, restoration of Wright’s Unity Temple, the Oak Park landmark that is the finest public building of Wright’s Chicago years and home to one of the most beautiful rooms in America.

Instead of finishing on schedule last fall, the $25 million project is wrapping up just in time for the 150th anniversary of Wright’s birthday, June 8. The building’s Unitarian Universalist congregation will return for services June 11. A formal ribbon-cutting and open house are scheduled for June 17. It’s as though Wright himself had willed the timing to demonstrate afresh his genius at the very moment when public attention will be riveted on his legacy.

For decades, scholars and critics have remarked upon the striking contrast between Unity Temple’s exterior and interior: The former, made of exposed concrete, is monumental, monochromatic and seemingly impenetrable. The latter, a skylit room with multiple seating tiers, is grand yet human-scaled, enlivened by a rich palette of earth-toned colors, and as airy as the concrete cube is heavy.

Yet the restoration breaks down this dichotomy, revealing a strong aesthetic connection between the radically severe exterior and the warm, intimate interior — a new unity, if you will, for Unity Temple. The key step involves the return of robust interior finishes that once wove a thread of nature-inspired continuity between inside and outside. Without them, we now know, Unity Temple was simply not whole. 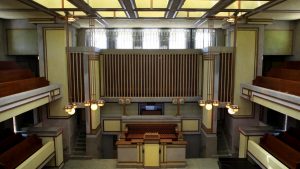 The practically-minded will be delighted to know that the restoration also delivers creature comforts like air conditioning that will prevent the heavenly interior from turning hellishly hot come summer. The exterior is even said to be leak-free. We’ll have to see about that, given Wright’s infamous track record of leaky flat-roofed buildings that forced their occupants to haul out drip buckets for what they referred to as “one-bucket,” “two-bucket” and “three-bucket” rains.

Success, it’s often said, has many fathers, and so it is with here: A team of consultants led by Chicago’s Harboe Architects has lavished exacting care on every aspect of this project, from the restoration of jewel-like art glass to the recreation of textured plaster walls. This high level of quality was made possible by $10 million lead grant from Chicago’s Alphawood Foundation, $1.75 million from the congregation and the rest from private donors.

Yet there’s a catch, as there always seems to be with Wright, who frequently lived beyond his means: The nonprofit that spearheaded the project, Unity Temple Restoration Foundation, still must raise roughly half the project’s budget. For now, a bridge loan covers those costs. The restoration itself offers the best advertisement for foundations and individuals to make up the balance.

From the first, financial constraints have shaped Unity Temple, which sits amid Oak Park’s thriving downtown at 875 Lake St. After the congregation’s Gothic Revival church burned in 1905, its leaders asked Wright, who was born into a Unitarian family in 1867, to design a new building on a prominent site along Lake Street’s noisy streetcar line. The budget, a mere $45,000, did not allow for expensive materials or elaborate ornament. So Wright, ever the innovator, fashioned his design from inexpensive poured-in-place concrete. 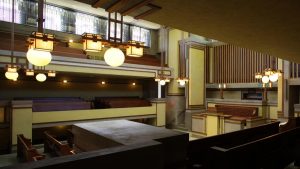 Victorians accustomed to embroidered surfaces must have been shocked by the monolithic abstraction of the completed 1908 building: A high-walled house of worship along Lake Street, joined by a foyer to a social hall and classroom building called Unity House. The passages to, and through, the sanctuary were equally radical. A circuitous route — the classic Wright trope known as the “path of discovery” — led from Lake Street to the entrance on a quiet side street. Inside, more turns took the worshipper from dark, tightly-confined ground-floor spaces that Wright labeled “cloisters” on upward and into the sanctuary’s spectacular explosion of space and light.

It was — and is — an extraordinary gathering place, in which space flows freely, liberated from the convention of the box. Yet there’s a profound sense of order and repose, as if one had come upon a light-dappled glade. The intimacy is palpable, courtesy of tiered balconies which ensure that no seat is more than 45 feet from the pulpit. Sunlight filters down from a grid of skylights, creating an effect that Wright compared to a “happy cloudless day.” Instead of turning its back on the minister to exit, congregation members pass through doors cut into walls on either side of the pulpit. In theory, at least, one enters as an individual and leaves as a member of a community

“Unity Temple is where you will find the first real expression of the idea that the space within the building is the reality of that building,” Wright remarked in 1952, seven years before his death.

But like many Wright buildings, Unity Temple challenged the patience and finances of its occupants. Even after a 1973 renovation covered the failing original exterior with a layer of “shotcrete,” a pneumatically-applied concrete, cracks and chipping persisted. Naturally, the building’s many roofs leaked. Seepage from the building’s internal drains, which were concealed in interior columns, weakened its concrete bones. When a large chunk of the ceiling fell in the middle of the night nine years ago, “it was a wake-up call about the instability of the building,” recalled the Rev. Alan Taylor, Unity Temple’s senior minister.

The restoration team has done meticulous work, beginning with the exterior, where portions of the 1973 shotcrete have been removed and replaced with new swaths of the material. Along with new roofs, restored art glass and enlarged internal drains, the new shotcrete is supposed to create that rarest of conditions in a Wright building — a structure that doesn’t leak like a sieve. “The system is good. It’s been tested,” said Gunny Harboe of Harboe Architects, who worked on the project with colleague Bob Score. (The building’s sagging eaves were fixed in 2002.)

Replacing the shotcrete also presented an aesthetic challenge. Unity Temple’s exterior is not a simple flat gray but a richly-textured aggregate of cement, sand and pebbles that range in color from white to brown to flint. Getting the right blend was like finding the elusive mix for a perfect cocktail. Contractors had to do some spots two or three times before the work was pronounced satisfactory.

The outcome largely avoids the pitfalls of a patchwork, although close inspection reveals slight variations in color. Yet time, weathering and the curing of the shotcrete should eventually blur those distinctions. And it will be no great sin if some of them remain. Unity Temple’s exterior has always had a certain mottled look. One of Wright’s prime tenets was to build “in the nature of materials,” which meant respecting their inherent properties. New in-ground night lighting will showcase the handsomely refurbished exterior and its decorative concrete columns.

The real revelations, though, are inside, where all interior surfaces have been returned to their 1908 appearance. That may not sound dramatic but it’s a major shift when you realize that multiple coats of paint, even modern latex paint, had been slathered onto the original walls. That rendered them flat and textureless, which was not what Wright intended.

Drawing on historic photographs and microscopic paint analysis, the architects and Philadelphia’s Building Conservation Associates re-created three types of textured plaster walls (rough, semi-rough and smooth) and Wright’s earth-toned color palette (pale yellow, green and brown). Contractors applied glazes over the plaster, giving them their color and a luminous sheen appropriate to a sacred space. The outcome is subtle but striking, especially within the sanctuary.

From the skylight to the ground floor, the freshly-remodeled interior walls have a new sense of texture and motion, restoring a lost layer of visual richness. Just as important, the interior now engages in a quiet but unmistakable dialogue with the building’s textured-concrete exterior. Inside and outside are opposites yet part of the same whole, a yin-yang relationship that makes tangible Wright’s elusive gospel of an “organic architecture.”

“No one’s seen it that way in a long time,” Harboe said.

To their credit, the team of designers has addressed a host of practical issues without aesthetic sacrifice.

Shallow trenches were dug in the concrete walls, then covered with plaster, to allow for the rewiring of electrical fixtures. LEDs were installed beneath the sanctuary’s skylights to give worshippers in the top seating tiers improved lighting as they read from prayer books. Mechanical systems were deftly inserted in the four hollow columns that support the building. Geothermal wells — nine of them, descending 500 feet beneath the front lawn — will provide the air conditioning the building has long lacked. New theater lights will improve Unity Temple’s ability to host performances.

A comparable assortment of formal and functional improvements are being made to Unity House, though they were not complete when I toured last week.

What a change has transpired since 2000, when the Landmarks Preservation Council of Illinois (now Landmarks Illinois) placed the deteriorating Unity Temple on its annual list of the state’s most endangered structures! Today, Unity Temple is a landmark renewed, an enduring statement of Wright’s genius and a vivid reminder that his brilliance extended far beyond the Prairie Style houses for which he is best known. There can be no better way to celebrate the 150th anniversary of Wright’s birth than to see and experience this revived masterpiece.