Below is an article written by Chuck Fieldman of the Chicago Tribune about the new security upgrades for entry into 9 Hinsdale-Clarendon Hills District 181 schools.

Mr. Fieldman details Pentegra Systems’ integrated security solution, which District 181 refers to as “double buzzer systems.” Visitors to the schools will still walk into an unlocked door and into a vestibule where he or she will then have to be buzzed in by a school employee.

However, an additional layer of security is being added where he or she will then have to be buzzed in from inside the office to then gain access into the school itself.

This project will be completed over winter break and be up and running by the time the students return in January. 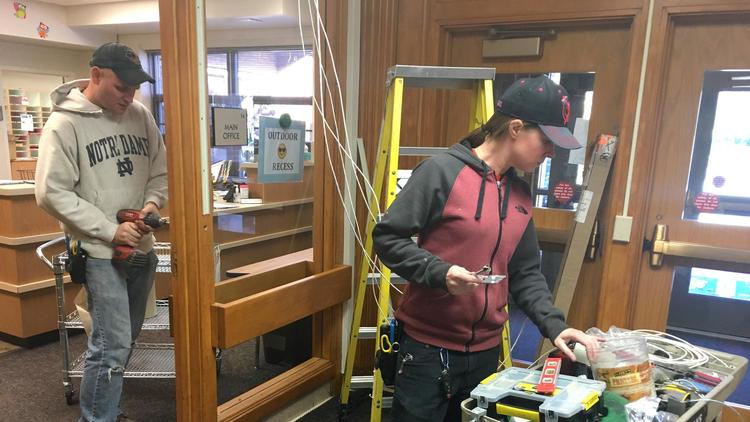 Hinsdale-Clarendon Hills Elementary District 181 is adding a layer of security for entry into its nine school buildings.

“We’ve been calling it a double-buzzer system,” said Bridget McGuiggan, the district’s communications director and chairman of the district’s Safety & Crisis Committee.

Visitors to district school buildings now may enter an unlocked door into a vestibule, but must be buzzed into the office by a secretary or another school employee.

That protocol will remain. However, the new system also will require an office staff member to buzz visitors out of the office in order to get into other parts of the building.

“In some cases, parents may be coming to drop something off, a lunch or musical instrument, for example,” McGuiggan said. “In those cases, they can drop those items off in the vestibule and don’t need to enter the rest of the building.”

The committee considered requiring a staff member to buzz visitors from outside into the vestibules, McGuiggan said.

“We don’t want to make parents stand out in the elements, and I don’t know it would add substantially to the security when they already aren’t able to get into the office without being buzzed in,” she said. “Safety is the priority, and we are being proactive with that, but we want to be as welcoming as we can be, too.”

Representatives from the Hinsdale, Clarendon Hills and Burr Ridge police departments served on the committee.

Along with the additional hardware needed for the new buzzer system, main entrance cameras and intercoms are being replaced in all schools with equipment that provides a clearer view of visitors for staff.

The security work was started Monday, was to continue Tuesday and be completed over winter break.

“The idea was to have this work done while students are not in the buildings,” McGuiggan said. “Everything should be working when students return from winter break.”

Cost of the new security cameras, intercoms, ID card reader and buzzer system is $12,000 to $16,000 per school, said Mike Duggan, director of facilities. The system won’t be installed at Hinsdale Middle School, but will be included in the new HMS, which is under construction, Duggan said.

District 181 plans to implement an additional security measure some time in early 2018, similar to one being used at Hinsdale Central.

That system requires visitors to schools to provide identification, which will be scanned before they are allowed beyond the school office with a badge sticker printed by the system.

“This change will support consistency in district visitor procedures, ensure appropriate background checks have been completed, and allow us to maintain a digital log of our guests, all while integrating with our student information system,” superintendent Don White said.

McGuiggan said the Visitor Management System has a total cost of about $9,400 for all schools, which includes the ID scanner, badge printer, badge stickers and one-time setup costs, as well as an annual fee for software. There also is annual recurring cost of about $3,600, she said.

5 Collaboration Technologies That Millennials Want At Work
5 Tips For Successful Video on Wireless Networks (WLAN)
Advantages of Leasing Technology
Are you using Video Conferencing yet?